By Sunday the entire wood floor was gone, as well as a little more of the plaster. So much for thinking I had knocked it all down. Now you can really see the mess in the crawlspace. And all of that mess needs to come out! 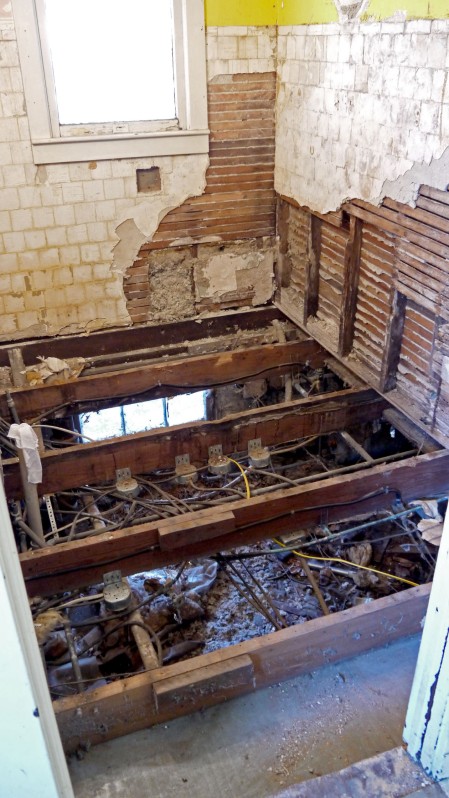 Because I know I will be doing some electrical work and need to maneuver all over for the plumbing, I want the crawlspace to be super easy to navigate and work in. No, it will never be on the cover of Better Homes & Garden magazine (I can see it now: “This Season’s Coolest Crawl Space”), but I don’t want it looking like a trash dump either. And apparently that’s exactly what a previous owner thought it was. Or was he hiding from the prohibitionists…

But seriously, that is most of the bottles I took out. Must be close to 100, almost all are Bond & Lillard whiskey, but along with buckets and buckets full of vintage beer cans (apparently not aluminum, because they are all but rusty pieces now – but I can tell he enjoyed Drewry’s), and a few other bottles of various sizes and proofs. I’m not tossing these all just yet, I see some future Pinterest projects down the road for the outdoor patio in my head.

The amount of crazy wiring under the bathroom floor had me concerned at first, but my contractor friend assured me it’s not uncommon. The amount this floor was leaking should have been a concern to the previous owner, but I plan to make sure the entire floor is watertight by using a waterproofing membrane before laying the tile finish floor. Upon heaving the 38th bucket of bottles and cans out of the crawlspace, I came to the conclusion that the previous owner MUST have been drinking whiskey while wiring. Most of the wiring is Romex, but it’s a crazy example of unorganized chaos – wires overlapping wires, hanging down between floor joists, wrapped around concrete support pillars, and not a straight line to be found. And was there a shortage of wire staples that year? Geesh! My OCD wants to tear it all out and start over, but I realize I cannot afford to do that and for the most part, its safe wiring, just confusing. I do plan to trace each wire to the corresponding room or piece of equipment, and then trace it to a breaker in the electrical panel. This is for two reasons; first, I want to know which breakers are responsible for which rooms/fixtures; second, I want to make sure there are not too many fixtures on one breaker. I’ve lived in a house where I might have on the tv, computer, and vacuum cleaner and then the heater kicks on and, click, the breaker trips. I’m gonna try to avoid that by calling in the the help of a friend who’s father is an electrician. And this book I picked up at a yard sale last fall. It might be vintage, but so is this house. And so much of the information in here still applies; the basics haven’t changed.

I also want the the trash out now because I need to begin running the new plumbing if I’m ever gonna get this bathroom finished. Even the nicest looking bathroom is no good without running and flushing water. And talk about metal scrap: the amount of galvanized metal, lengths of old copper, and cast iron is just stupid. And even the entire old steel furnace, which is a hulking piece of steel and cast iron (not used for what looks like decades). I’ll be keeping it all in a pile in the garage, and then hauling it to our local cash-for-scrap recycling center. I love when Earth friendly puts cash in the bank! But these steps aren’t so glamorous, and for fear of the dust in the camera, I probably won’t snap many photos of the trashing and plumbing steps. I do think it’s about time for a photo walk through of the entire house, to document the true “before” status.

This entry was posted on April 29, 2014, 10:43 PM and is filed under DIY, Home Improvement. You can follow any responses to this entry through RSS 2.0. You can leave a response, or trackback from your own site.