Posted by Adam A. Ries in DIY, Home Improvement, Interior Design on May 29, 2016

Spare bedroom, that is.

Several months without a post. That doesn’t mean I haven’t been busy, just that I haven’t been working on my own home. In fact, in the last two months I’ve helped my brother-in-law with different aspects of their master bathroom remodel, and a partial remodel on my mother’s kitchen (reconfigured the existing base cabinets, installed a dishwasher, built additional base cabinets, and installed new countertop).

But sometime in between building cabinets in my unheated garage in the middle of an Ohio February, I finished painting the spare bedroom and nailed the window trim & baseboards back into place. Wow, did that make a difference!

While reinstalling the baseboard, I added outlets to the perimeter of the bedroom through the baseboard. Each bedroom only had 1 original outlet to begin with. And I added the new outlets in the baseboard, just as the existing outlets were placed. I used brown outlet and outlet covers to help them disappear into the dark woodwork.

I already described the process of sanding & re-painting the wardrobe, and installing the light. Along with all new wiring, I can add this room to the 99% finished list along with the bathroom and laundry. (Like nearly every other room, the floor needs a few nails here and there to secure the boards, and then a whole-house floor refinishing party.)

Lastly, I found a door to fit at an architectural salvage store (the spare bedroom was door-less when I bought the house). It matches the bathroom door, but unfortunately was painted on one side. I spent the better part of 2 days stripping the paint – first white, then orange underneath.

It was the correct height, but actually just about 1/4″ too narrow. I glued & clamped a thin piece of pine to the hinge edge of the door, then with a hand plane and sandpaper made it flush with the sides of the door. 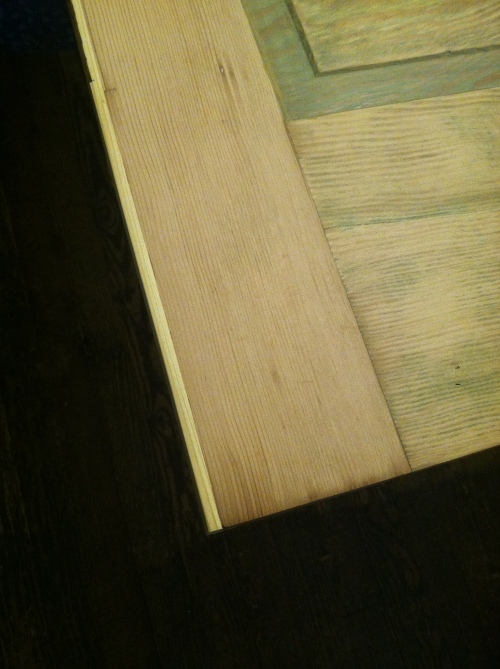 The other side was stained & varnished almost a matching color to my woodwork, so I just sanded off the finish and then re-stained both sides of the door to blend the color. It took 2 coats of stain on the freshly stripped side to get dark enough, then 2 coats of satin polyurethane. The piece I added to meet the right width is almost unnoticeable. 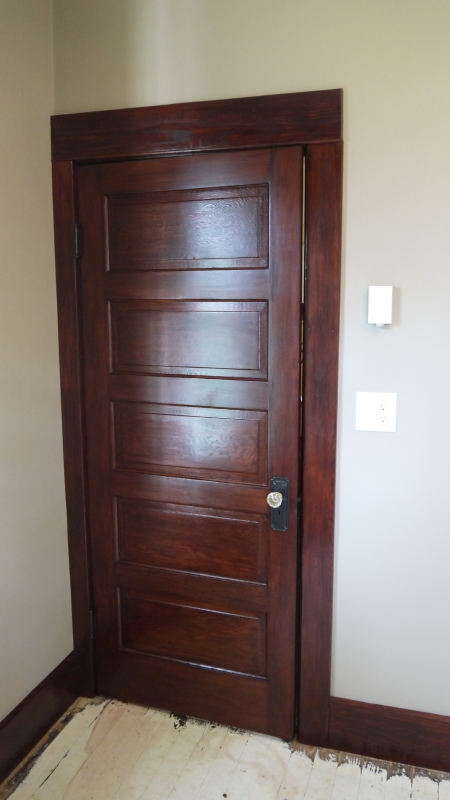 I’ve been collecting glass doorknobs when I find them inexpensively at antique stores or Goodwill, so I just had to buy the mortise latch threaded spindle – which I was pleasantly surprised to find they still sell at the hardware store. For me, there is nothing so rewarding as the feeling of putting the finishing touches on a completed project.

So now I begin the same process to the other bedroom, starting with stripping the woodwork and restoring the windows again.

Swinging Again (or, “All that for a broom closet?”)

“All that for a broom closet?”

That is exactly what my friend said Monday evening when she was over for dinner. I showed her the finished broom closet door compared to the “before” photo.

“Wouldn’t it have been easier just to build and stain a new door?” 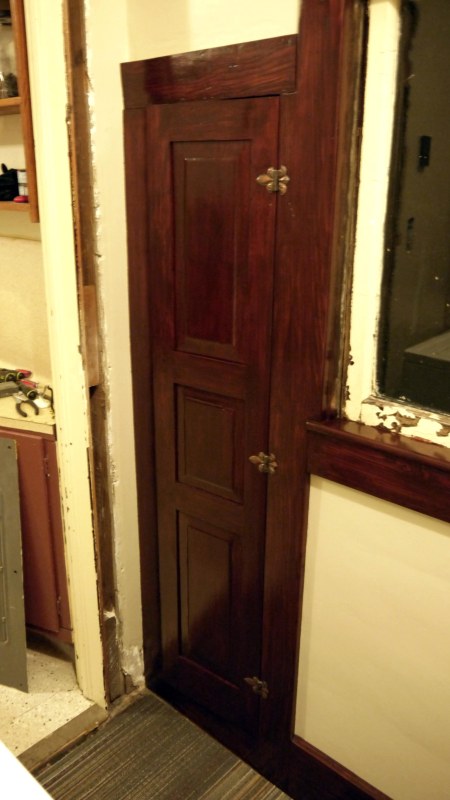 Well, maybe. I’d like to think it would’ve been the same amount of work. But a new door would have been “fake.” It wouldn’t have the gauge near the top hinge, where perhaps the guy who installed the door slipped with his screwdriver. Or the chip on the middle raised panel, from when a little kid running to play outside hit the door with the toy in his hand. And I’d have to have found a couple special boards with wormholes dotting one side, like on the inside of the door frame. Gauged, chipped, and wormholes? Yes. Flat, smooth, perfect; no. Once again, it’s something I like to call “character.”

A quick visit to my local friendly Ace Hardware and I found specialty screws that were a perfect fit & color match for the original hinges, and the door was “swinging again” (It’s like when they say the title of the movie in the movie!) in just 5 minutes.

Unfortunately the cabinet door latch was busted – didn’t have a knob at all, and from all the paint it didn’t have it’s spring action either. (In fact, to open this cabinet, someone had folded over a piece of duct tape & stapled it to the edge of the door to make a pull tab. That’s one solution.) So I’ll keep looking through rummage piles until I find a door latch the same style. For now, the door wants to naturally stay open about 1/2 an inch, so I can use it without a knob. 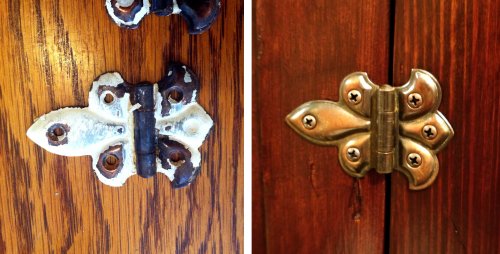 Lastly, I didn’t like how the back wall of the cabinet looked. The paint is chipping, and whatever is under the paint doesn’t even look or feel like wood- it’s almost flexible like thin hard-board paneling. So I bought a sheet of plywood beadboard panel and ripped it down to the exact width to fit inside. Once it was stained & poly’d, it looks like it has always been there. Yes, I lost 3/8 inch in cabinet depth, but there is still plenty of room for a broom, dustpan, and even a small mop handle. On my next run to the hardware store I’ll pick up a couple broom handle clips, a small hook to hold the dustpan, and I’ll be in business.

Although I went ahead and stained & poly’d most of the laundry room trim and baseboard, there were some small pieces of baseboard left that were – – waiting in the garage. And the built-in broom closet had a busted panel in the door, so I removed it from the hinges and it was waiting in the garage also. Just like the woodwork had 50 layers of paint, so does all the hardware. The hinges are salvagable (although I destroyed the screws trying to scrape the paint off of them to back them out). The door latch was busted, but there are other examples in the house so I know what type to look for.

I was able to get the busted upper panel out pretty easily – the frame around it on the back of the door was split around the panel, probably when it was broken originally. I carefully scraped the paint off each of the 2 pieces first, I guess I was concerned that once the panel was glued back together there would be paint in the seam that I wouldn’t be able to get out. Once scraped, I glued & clamped the broken panel, and went to scraping the door.

Scraping flat areas isn’t so bad, and it goes pretty quick. The panels are raised in the center, so a smaller slightly round shaped scraper helps on the recessed outer edges. Lots of paint chips. 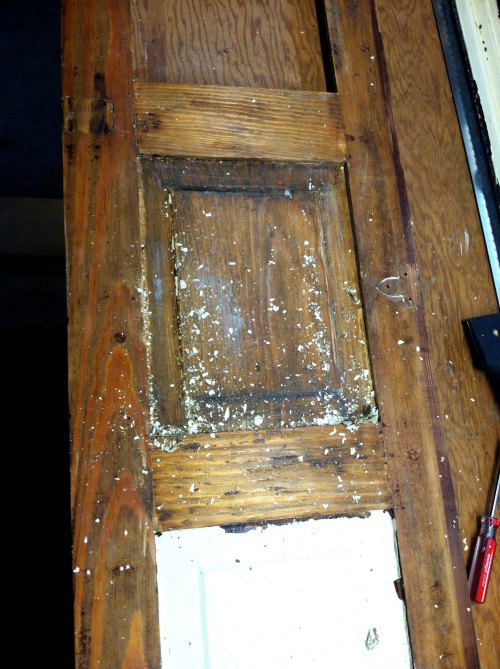 Once the repaired panel was dry, I could remove the clamps and scrape the excess glue off.

The hardware was caked with paint. This picture is actually after the first soaking and scrub with a brass bristle brush. The secret for removing paint off of metal – hinges, knobs, handles – is a good soaking for several hours in very hot water with a touch of baking soda. An old crock pot works really well for this, set it and forget it.

The paint on these was so thick, no wonder the door would barely open or close. It took two soakings and a little bit of scrubbing.

But they came out perfectly clean. Some new screws and these will be ready for another hundred years of action.

I’ve got the first coat of stain on the door, the panel, and the miscellaneous baseboard pieces. But to achieve the rich mahogany color that was originally under the paint, I have to wait a full day between the 1st and 2nd layers of stain – the stain has to build. If I try to apply the 2nd layer too soon, it simply melts the first layer and I don’t get the rich, full color. I’ll piece the panel back into it’s frame before I brush on the polyurethane, keeping it in place with some thin pieces tacked around it on the back. I think something like screen door trim will do the trick.

One more layer of stain, and 2 coats of poly – and the door will be back where it belongs. And the laundry will be almost, almost, almost finished.