Posted by Adam A. Ries in DIY, Home Improvement, Interior Design on September 3, 2014

I love the look of white and gray Carrara marble, especially the aged floors and walls one can find in period homes and old buildings. It’s a rather soft stone, so it shows wear after decades of use. But that wear adds to its beauty.

Unfortunately, I really couldn’t afford marble for my bathroom. There is just too much tile on the walls, and even the floor would have been too expensive in marble hexagon mosaic.  I just couldn’t justify investing that much into this modest of a home – a humble 2-bedroom house in this neighborhood won’t see that return on re-sale anytime soon.

But I found a way to get my beloved marble after all – and affordably.

When it came to tiling the built-in niche, I used the mini-subway tiles (2″ x 3″) for the back wall, and I planned to use bullnose edge tiles for the sides to wrap back to the shower wall. But I didn’t like how the bullnose tiles looked on the bottom ledge. Knowing that soap bars and bottles would be sitting here wet, that would have meant constantly dirty grout lines. Not to mention, I’m not sure how I would make a shelf in the middle using smaller tiles – how would it hold itself up?

So while walking through the tile aisle at Home Depot, I saw how affordable 12″ x 12″ marble tiles are – $3.99. And I realized I could get both the bottom ledge and center shelf from a single square.

I cut and installed the bottom ledge first, and I liked how it looked to keep it slightly proud – 1/8″ or so – of the surrounding wall tiles. It gives it more pronunciation, and that “I designed it like this on purpose” look. To make sure it drains, I pressed it into the fresh thin-set and pressed harder along the front edge – so it is slightly slanted out toward the tub.

For the sides, I used a bullnose tile. Because the niche is 4″ deep, the 3″ bullnose tile wasnt deep enough. I had to use 4″ bullnose tiles, so up and down both sides I had to cut each tile so that the grout lines would line up. I went 4 tiles high -the equivalent of 12 inches- then set the next marble piece in to act as the upper shelf. It sits on the tiles below it.

Where the top and sides meet, I cut the meeting edge at a 45 degree angle to miter the corners. The resulting niche is below.

The marble looks great, just a hint of natural stone in the field of all white ceramic tile. Both the ledge and shelf are just slightly pitched to drain outward, so water will drain. The only thing I realized afterward is that the factory edge of the marble isn’t exactly smooth. In fact, it’s almost sharp. Not “cut off a finger” sharp, but “ouch,” noticeably sharper than it should be. I’m thinking I will try to hone it down with wet-sandpaper and see what that does.

Grouting this was a little tricky also. The tile float was almost too big, especially in the upper part. But the beauty of grout is that messy doesn’t matter, it all sponges off. 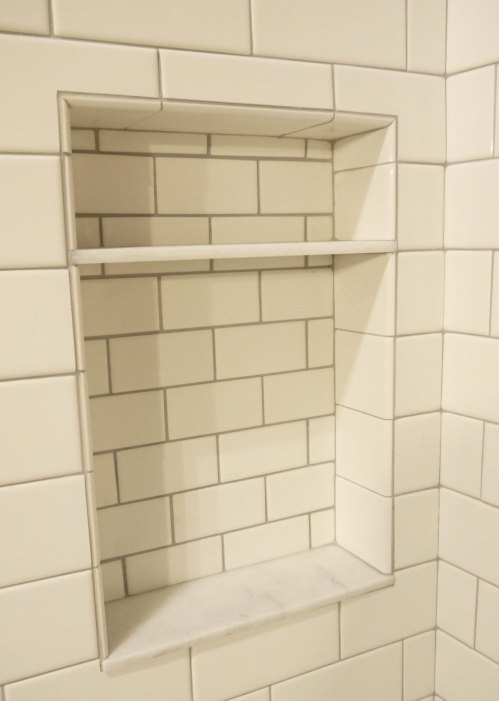 I’m thrilled with how it looks! Not a huge amount of shampoo storage, but enough for 5 or 6 bottles lined up sideways, and a few bars of soap on the shelf above.

The window ledge and sides will be done very similarly, only I’m planning to use a piece of marble threshold for the ledge. Lowe’s sells them in different widths and lengths, so I can find one to fit and not have any seams along the sill. But I have another week yet until the window arrives. In the mean time, I’m working on getting the wood dresser transformed into the bathroom vanity. Check out how it looks so far:

Grout, Grout, Let it all Out!

Posted by Adam A. Ries in DIY, Home Improvement on September 2, 2014

How did I spend my Labor Day weekend? While others were frolicking about and eating themselves gluttonous at our County Fair (who am I kidding, I love me some deep fried cheese curds and lemon shake-ups!), I spent my extended weekend grouting and sponging, grouting and sponging. In total, I think I grouted 150 square feet of tile lines. I forgot how long it takes, and how terrible the whole grouting process is to the skin on my hands. Cuticles are shot and fingertips feel paper thin – and the dark stains around my finger nails are awesome – and won’t scrub off. But enough whining, let’s get down and grout!

The walls are grouted with AccuColor Premium Unsanded Grout in the color Silverado. It’s a very pale silvery gray. When selecting grout colors for the walls and floor, I wanted the walls to have a natural looking shadow for the grout lines – almost the way they looked before grout.

This color accomplished that perfectly. The tile store recommended unsanded, basically which means it doesn’t have the sand typical grout has. This is best for skinny grout lines. Mixing it was very similar to mixing the mortar when sticking the tiles up, except the mix was a very fine powder. It was really easy to work with, using a grout float to press it into the little lines. 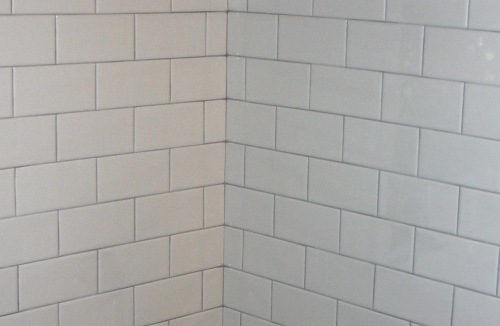 Then it was lots and lots of sponging to wipe off all of the excess, careful not to take too much out of the lines. Grouting the walls took an entire day – I began right after lunch, took a short break for dinner, and finished about 10pm. As much and as many times as I wiped the walls down, they would always dry hazy. It was impossible to get all of the grout residue off. I even left the wall dry for over an hour, came back to wipe the haze off and sure enough, it dried hazy again. I figured out the next day that a clean dry cotton rag worked the best, almost like polishing the tile.

The next morning I began grouting the floor. I love old bathrooms with the dark grout lines in the floor, so I used a darker color – Light Pewter – for the floor grout.

With a darker grout, it starts to get scary. This was the moment of truth – any inconsistencies in the spacing would stick out like a sore thumb.

There are literally 2 or 3 individual spots where the tile lines might be thicker than the others, but they are so slight, probably no one but me will ever notice.

In the end, I am thrilled with how it looks! Exactly the vision I’ve had in my mind for months, now it actually exists! But I can’t install the fixtures quite yet. Although it’s an optional step with darker grout colors, I have decided to go the extra step and seal all of the grout lines with a penetrating grout sealer. It goes on liquid, soaks into the grout and makes a water-proof coating within the grout itself. After 2 applications, water will literally bead up when it contacts the grout, keeping water from penetrating below the tile and giving it a super stain resistance. I’ll say it again, when it comes to the bathroom there is no such thing as overly-waterproof.

Posted by Adam A. Ries in DIY, Home Improvement, Interior Design on September 1, 2014

It turns out tiling takes forever. Or at least a full month for me. Part of the reason is that I’ve traveled to visit friends on my weekends or helped on house projects with family members. The majority of the tiling I had left required using the deathly loud wet saw, and I feel terrible cranking that thing up later than 7 o’clock at night – it is seriously the loudest piece of equipment I’ve ever used, all wrapped up in a table-top saw. I decided to spare my neighbors the screaming from the wet saw, and in turn the tiling wasn’t getting done. Here is how it looked at the last post:

The walls were nearly all tiled, just the trim pieces missing along the top, and of course that pesky wall niche. But more on that later, as I couldn’t make up my mind how I wanted to trim it out.

So it was time for the floor. I sketched out a pattern for the floor that I thought would complement the walls. I knew I wanted white hexagon tile, but I liked how many of the period bathrooms I saw had a black border around the edge, either in black hexagons, little stars, or a solid stripe. In the name on consistency, I used the same narrow black lines that I used on the walls, only a single black line rather than a double.

I started with a 6″ square all around the room and flat up against the tub, then the skinny black liner tile, and then filled in the center – about 5 ft x 5 ft – with the white hex. 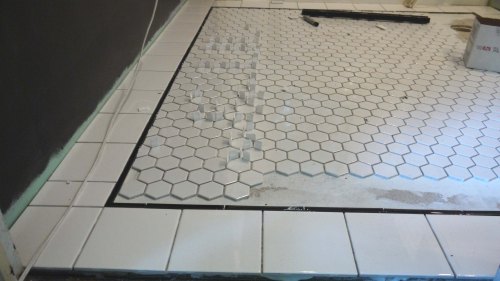 While the border pieces went down 1 at a time, I thought the center field would be faster because the hex comes in 12″ sheets with the tiles glued to a mesh backing. But once again I made it more difficult on myself in an effort to ensure the final result looked like a professional installation. In my weeks spent searching inspiration photos on Pinterest and Google, I’ve come across too many bathrooms where intentions were great – but execution was less than impressive. Below is just one example – notice that line where each sheet starts and ends? I vowed not to let that happen.

So my solution was to cut the first sheet of every 2nd row in half and lay the sheets across the floor the way one might lay brick – in a running bond pattern. And although the tiles are glued to a mesh, the spacing between the tiles still wants to vary. It took constant eyeballing the lines and watching for any spacing that looked too thin or too wide. And I still used a ton of 1/8″ plastic spacers. 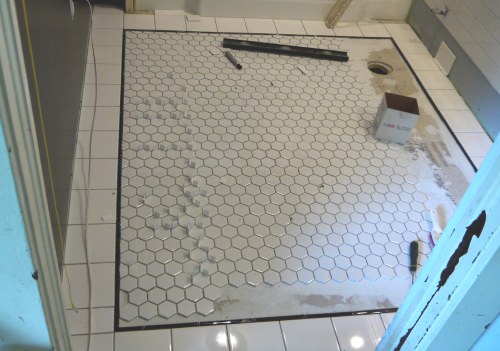 By this point, I was nearly as far as I could go using full sheets. This last row by the doorway I cut and laid 2 rows at a time, and then it was down to the little fillers around the border. These pieces – each one just a little smaller or larger than the one beside it. What a pain in the ass:

Seriously – the worst part of the whole tiling job right there. Other spots were tricky, but in a good way – like a “DIY Show Off” challenge, like these chair-rail returns: 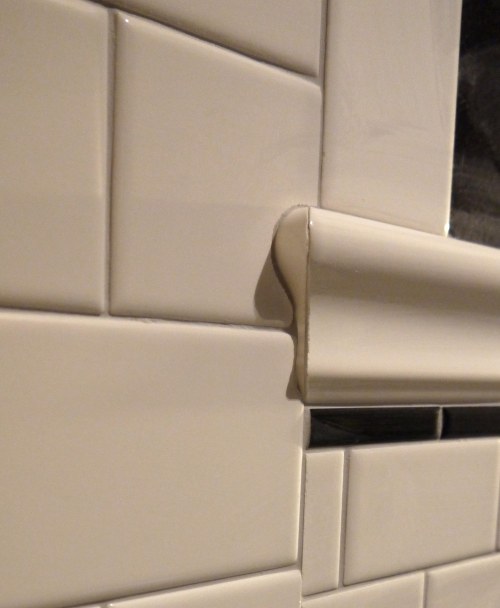 But those tiny slivers to finish the floor? Pretty sure every other finger has been cut trying to push those tiny pieces through the wet saw. I was glad when the floor was finished. Speaking of injury, this tiling project has been cruel. Cut hands and fingers on sharp tile edges; tiny little tile chips from the wet saw stick to my arms, but don’t try to brush them off – more cuts like little slivers of glass; like dozens of little paper cuts!

And then there are my knees. By the time I finished, I wish I had invested in a quality pair of knee pads. Lesson learned for the next flooring project. Check out those hexagons!

But in the end, the result was worth all the blood, sore finger tips, and smashed knees. As my neighbors described it over the weekend when they stopped by for a progress tour, “it looks like a charming historic hotel bathroom!” My goal all along has been something that looks “timeless.” I want anyone who sees it to wonder if it’s the home’s original bathroom. By the way, I have some awesome neighbors who are super friendly and invite me over for homemade ice cream… #homebuyingscore.