As in, I’m done with the PVC drains and vents! What a relief. I had most of the rough plumbing done a few weeks ago, enough to install the subfloor & underlayment, but I still had a few things unfinished. So over the past week I rough plumbed for the tub faucet, shower head, and shower mixer valve.

The extra notch out of the wall stud (don’t worry, this is not a load bearing wall!) is because I second guessed myself about the height of the mixer valve and shower handle. I originally put it at a height that felt comfortable when standing. But then I found that the typical standard is really really low, so I moved it down. After showering just this morning, I realized that as a 6′-4″ man, I don’t want to have to bend down to reach the shower handle. So I think I’m going to move it back up. I did decide upon a very tall height for the shower faucet. I believe it’s time to rid myself of this plague that has troubled my showering experience for the past decade: 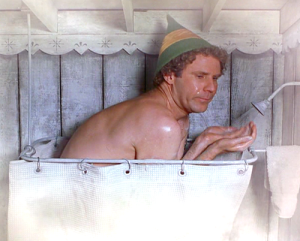 Seriously, I can’t even remember what it feels like to wash my hair without ducking or bending half over. I cannot wait.

Based on everything I’ve read, I decided upon cement board on the walls around the tub/shower as a backer board for tile, but the rest of the bathroom walls will be moisture resistant drywall – often called greenboard. My brother-in-law helped me hang a few sheets of drywall Saturday, so the west bathroom wall is covered. I’ll do the same on the east wall. The south wall is staying plaster – with some patching around where the new light switches are. The bathroom is 5’8″ wide, and the tub is only 5′, which leaves me with a narrow space on the wall opposite of the shower head. After some Pinterest searching, I came upon a great solution to use this narrow space- almost the exact size, too.

Not my choice of colors for the towels, but you get the picture. It turns what would otherwise be unusable space into a little bit of storage. It will be fun framing it out, but if I do it right, it might also serve as handy access area to the back of the breaker panel in the wall behind (for future electrical updates needing additional wires).

So to recap, below shows the different stages from just about a month ago to where I am now.

I can almost see the finished product (thanks to the hours I’ve spent on Pinterest!).

I actually got a lot done this week – kitchen sink, tub, part drywall, purchased wall tile for bathroom. But the biggest accomplishment was not mine, but rather what Dennis was able to get connected for me. The process itself is worthy of an entire upcoming post – wet floor, curse words, and a return trip to the hardware store – but for now, I’ll leave it at a single photo and one last sentence. I have hot water.