Mud Wrestling, and how the ceiling turned yellow

Not really wrestling, more like flinging. Because taping and mudding all of the drywall seams actually went pretty smoothly (no pun intended), but I did throw a little mud. There is definitely a knack to mudding drywall, flinging it from one trowel to the other to keep it manageable and at the edge of the knife. I watched several videos with tips and step by step instructions. The main lessons I took from the videos were 1) be generous with the mud first, then 2) scrape off as much as possible. Number 3), professionals use paper tape for seams. 4) Thin coats are the secret to a professional looking mud job. As are the correct drywall knives.

That being said, I started on the wall where I knew most of the seams would eventually be covered in tile. I figured that would be the best way to begin. 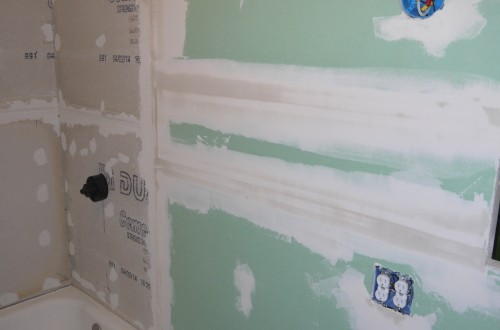 Sheets of drywall are 4′ x 8′, so laying them sideways  in a typical house with 8′ ceilings results in 1 seam in the center of the wall. My house has 9′ ceilings, which throws off that whole system. Since I know I want to tile the walls from the floor to plate-rail height (about 4′-6″ off the ground – to match the wainscot in the dining room), I put the 12 inch stripe in the center of the room where the two seams will be hidden once the tile goes up. 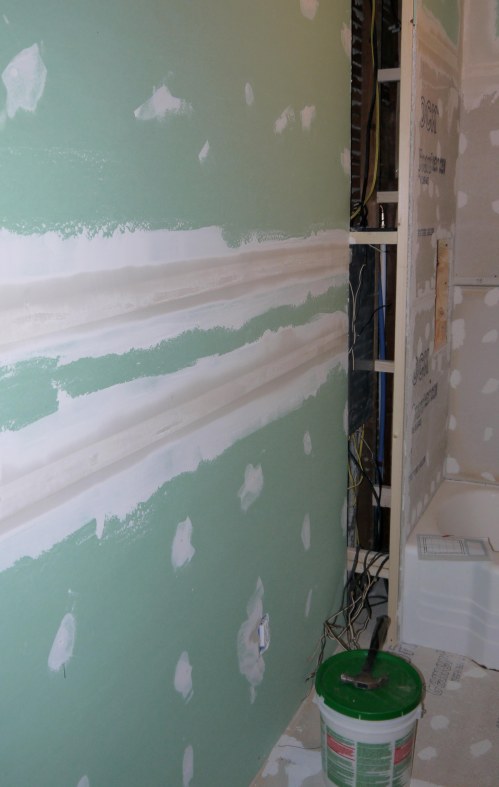 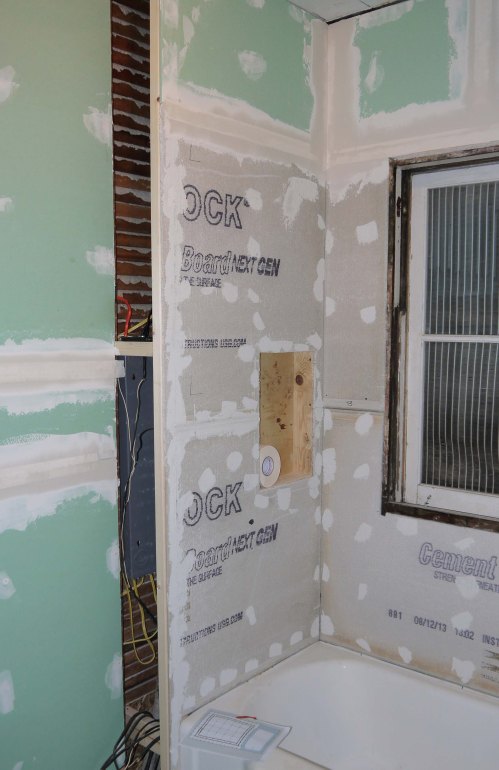 I’m not sure if I had to, but I went ahead and taped the seam between the drywall and cement board along the shower walls. I haven’t fully made up my mind about how tall the tile in the shower will go. I’ve seen some examples where they tile clear up to the ceiling: 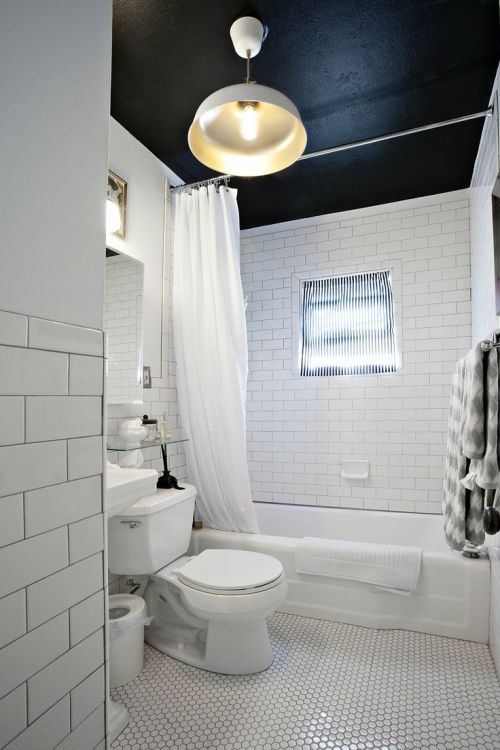 and some other examples where they leave anywhere from 12 to 24 inches of drywall to be painted: 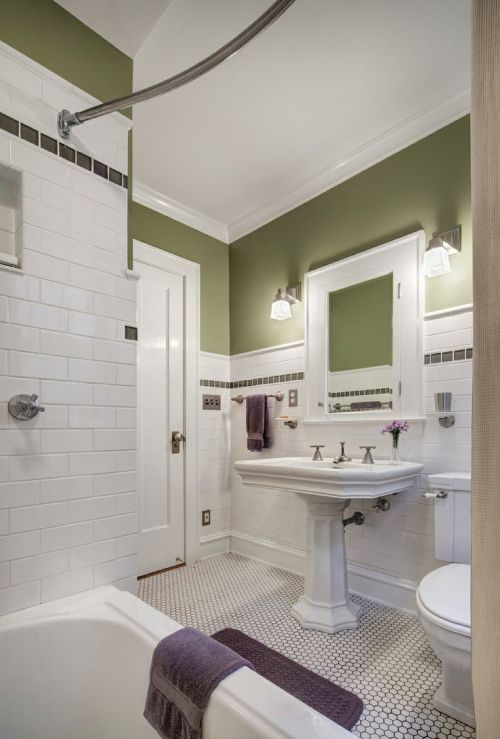 I’m leaning toward leaving drywall to be painted. There’s going to be plenty of white, so leaving that much wall space will bring the paint color onto all 4 walls.

I also like how in this shower, they part wrapped the window opening with tile, and then above the shower head height, they wrapped the upper portion of the window to look like the rest of the home’s trim. I’m thinking this is how I will wrap the window, except using the style of trim that matches my house. 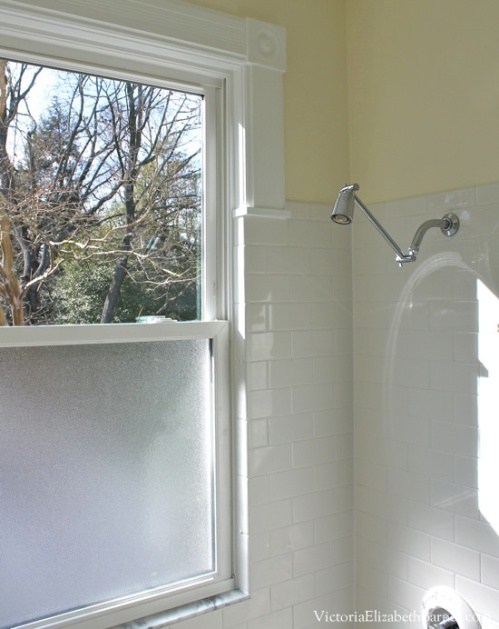 Now onto the second half of the title. As the photo below shows, the ceiling in the bathroom  was white. The ceiling’s plaster is in really good shape, so I only wanted to patch the cracks and few small holes. But first I used a 3″ putty knife to scrape off the areas of chipping or peeling paint. And that’s where “areas” turned into a larger and larger section of peeling paint. Not just a small area either, a huge area. And it wasn’t just a few layers of paint, I’m talking like every layer of paint in the history of the house. It must have been nearly a 1/16 of an inch thick. Back to a really early layer of most likely oil base paint, possibly the original plaster coat. 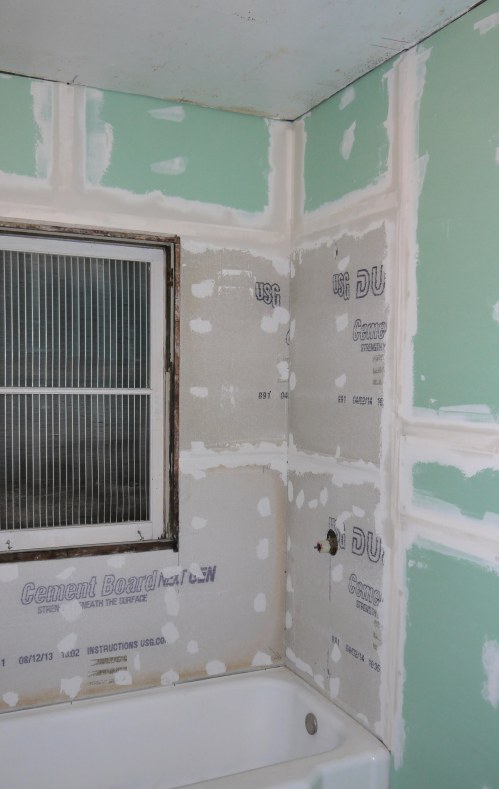 It just kept scraping off, I never got to a point where I felt comfortable leaving it. An hour later, the entire ceiling was scraped. So that’s how the ceiling turned yellow. 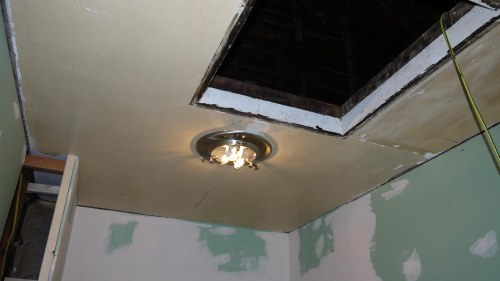 But the good news is that I got all of the paint scraped off. Better now than down the road when steam from the shower might have caused it to peel or pieces to fall off. And although I did fill all of the cracks, I wasn’t all that particular. If the ceiling looks just a bit crackly and old, that’s fine. After all, every room should have something that helps show the age of the house. It will give it character. After just a light sanding on the ceiling and all the walls, the bathroom is ready to be primed.

This entry was posted on July 13, 2014, 11:44 PM and is filed under DIY, Home Improvement. You can follow any responses to this entry through RSS 2.0. You can leave a response, or trackback from your own site.